HIV/AIDS, BRIEF OVERVIEW, GET THE FACTS! 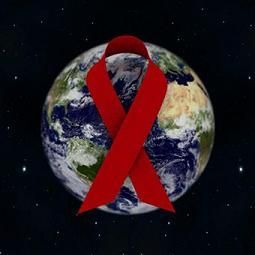 This article was written as a way for people to remember that HIV is still existing. Many people have forgotten about the very true reality of HIV and AIDS.  When HIV or Human Immunodeficiency Virus first appeared  in the United Stated back in the early 80's, everyone was in a panic. No one knew enough about the disease that was killing off millions at a time. All anyone knew was that if you caught AIDS, you were destined to die. There became a huge acknowledgement later on that HIV was contagious through sexual contact. It was also known as the "Gay" disease because many gay men were being infected at an astronomical rate. The first cases were also found among the gay community.

However, later on, research showed quickly that HIV was not just a disease that gay men would catch but also heterosexuals of both genders. This was shocking news for many, and another rush of panic came through and people were afraid the virus was contagious through a handshake. Of course this is not true; but when an unknown disease enters the scene, it brings immediate panic. Ignorance was running rampant, and not many people understood the life threatening disease, AIDS, or the virus it came from, HIV.

WHAT IS HIV?
HIV is known as the Human Immunodeficiency Virus that attacks a person's immune system, particularly T-Cells. T-Cells, or white blood cells, are needed within our body to help fight off sickness or diseases. Without white blood cells, our body can shut down over an illness as small as the common cold. Once a person no longer has these important cells to defend their body against different sicknesses, they die; but not from HIV, they die from AIDS. AIDS stands for Acquired Immune Deficiency Syndrome, and a person is diagnosed with this when their immune system is too weak too fight off infections. A person who obtains AIDS is most likely to die from pneumonia or something that a body with a healthy immune system would be able to easily fight off.

AIDS is a global-wide problem. The countries that have the biggest problems with AIDS are mostly 3rd world countries because they lack education, medication and the proper resources. Education is one of the primary ways to stop this disease from spreading. HIV is spread through sexual contact with another individual who has the virus. It is also spread through human bodily fluids, including blood, semen, pre-seminal breast milk, vaginal fluid, and sharing needles. Back in the early 80's and 90's, blood transfusions were a huge concern, as well as an unborn child catching the disease from his or her mother. With advanced technology, these particular risk areas have gone down substantially. You cannot get HIV by holding hands, hugging, giving someone a kiss on the cheek or sharing a toilet seat. These were common myths when the disease was first recognized.

HOW IS HIV SPREAD?
Because HIV is mainly spread through sexual contact, it is extremely preventable. If you are engaging in sexual activity (especially with multiple partners), it is always a great idea to get tested prior to engaging with another person in sexual activity. If you choose not to be tested, wear a condom. Many people will tell you that they are not infected, but many people do not understand they are infected with the disease, particularly since a person can live for years without exhibiting any symptoms.  You cannot tell if someone is infected by looking at them. 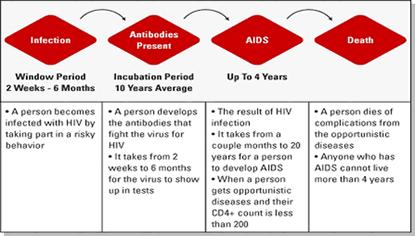 Birth control IS NOT A METHOD OF PROTECTION FROM HIV/AIDS. Older people becoming infected is on the rise, because, they do not think it is necessary to wear a condom since they cannot get pregnant. Regardless of whether or not you can or cannot get pregnant, WEAR A CONDOM! YOU are responsible for your health. If you need condoms, go to your local drugstore or briefly walk into a planned parenthood, where you can likely get them free of charge. 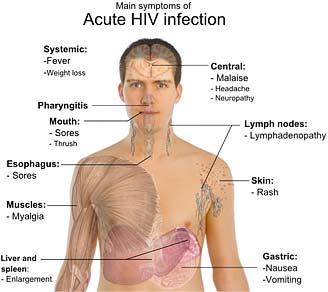 HOW DO YOU GET TESTED?
If you think you have come in contact with someone who is infected with HIV, you should wait at least 3 months before getting tested. This is primarily due to the fact that the virus may not show up immediately after exposure. It can take anywhere from 3 to 6 months before the virus is caught. Many health providers will probably have you come back again and get retested to ensure that there is no possibility that the HIV virus is present. There are many places where you can be tested for HIV: in the offices of a private doctor, a local health department, hospitals, family planning clinics and sites specifically set up for HIV testing. In some communities, home-based counseling and testing are available and can include couples counseling and support for safe post test disclosure of results.

Results are 100% confidential and and your health care provider should always have consent before taking the necessary test. There are also at home tests that you can take and these have a accuracy rate of 99.9%.


WHAT HAPPENS
IF YOUR RESULTS ARE POSITIVE?
If you learn that you are HIV positive, seek counseling immediately to help educate yourself about the treatments that are available. Back in 1981, over 30 million people died from AIDS; however, today there are many prescription drugs available that will allow you to live a long and productive life. People with HIV are able to have children, run, jump and play. HIV/AIDS should still be taken seriously, but if you find yourself feeling hopeless, there is hope. Do not spread the virus. This will not only hurt another innocent victim, but it could possibly end up hurting you health wise. As more people engage with different people who are infected, numerous strands can occur, making it even more difficult to treat via medication.

As human beings, each of us do things that we may regret. The important thing is to NEVER beat yourself up for a mistake. While a person should always take responsibility, they should always allow room to forgive themselves and live a happy life.