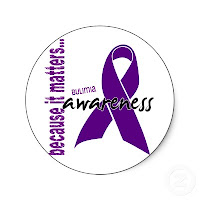 As mentioned previously, eating disorders are one of the leading cause of death by mental illness. Many people have pretty basic knowledge about the disease Anorexia, however, there are plenty of people who can not recognize Bulimia. Although both are eating disorders, each one manifests itself in a different way. An anorexic individual (male or woman) will under eat and exercise obsessively. They are more prone to be noticed because of their shrinking physical appearance. Regardless of how many baggy clothes one decides to wear to cover their disease, Anorexia is eventually is discovered, usually at a rate upon which the disease has gotten out of control.


A person who is bulimic will generally eat everything in sight, secretly. Usually, this comforts the person while they are eating. A bulimic individual usually feels stressed or depressed and the binge eating is a quick way to make them feel better, but only for a moment. Afterwards, they begin to feel immense guilt and usually practice getting rid of the food they consumed by vomiting and/or abusing laxatives. These two types of bulimia can be characterized as purging bulimia and non purging bulimia.
In many cases, it does not matter how big or small the snack is, an individual who is a victim of bulimia will try to get rid of it anyway they can. Bulimics do tend to exercise excessively and many often fast over an extended period of time. They are also susceptible to other compulsions, affective disorders, or addictions.
Although this is considered less serious than Anorexia, Bulimia has the ability to cause serious medical problems or death. Bulimia is a disease that goes unnoticed because the victim's weight generally does not fluctuate as drastic as a person with anorexia. This can make it difficult for someone on the outside to notice if there is a problem. 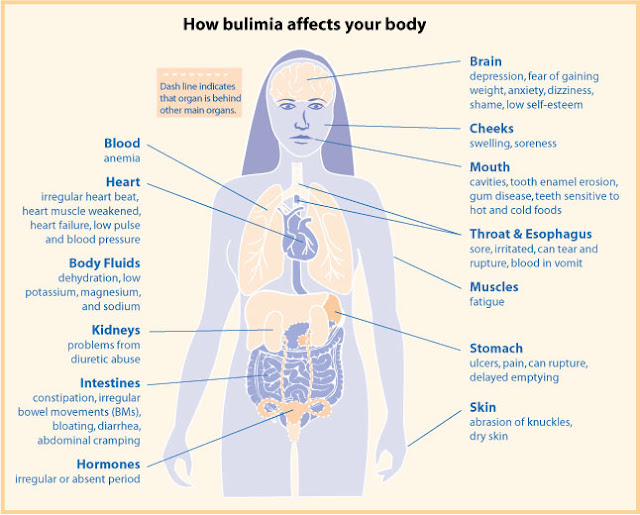 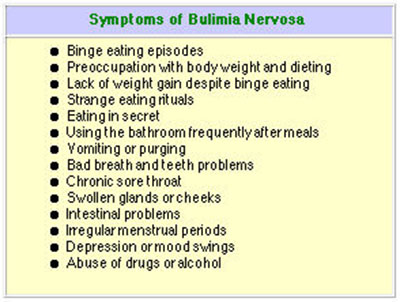 SIDE NOTE: Anytime you throw up, your body produces acid. If a person continues to make themselves throw up, then it is highly likely that the acid that is produced internally will destroy the esophagus. 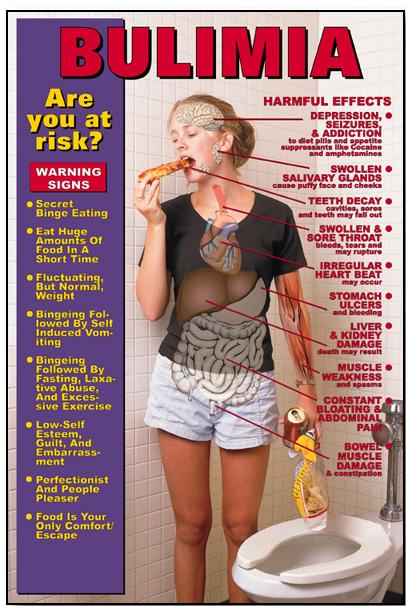 "The LORD your God is with you, he is mighty to save. He will take great delight in you, he will quiet you with his love, he will rejoice over you with singing (Zephaniah 3:17)."